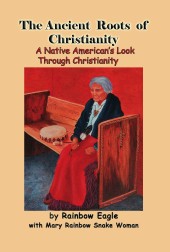 The Ancient Roots Of Christianity: A Native American's Look Through Christianity
by Rainbow Eagle with Mary Rainbow Snake Woman

Buy "The Ancient Roots Of Christianity" on Amazon.com or contact Rainbow Eagle directly at [email protected]

Humanity must learn to activate an aspect of human behavior that has been somewhat dormant for nearly five thousand years—the ability to think for ourselves!

"In time all things will be revealed." To me this means that there will be a time when teachings and other information will be hidden and a time when they will be available again. There have been many historical reasons for hiding away knowledge. We live in a time when some of the ancient sources of knowledge are once again being made available.

I have long felt that some of the real teachings of Jesus have been pushed aside, sifted and selected in order to reinforce particular agendas and belief systems. There has been a substantial departure from the unique ministry and teachings of Jesus over time.

I set out to discover as much as I could about what Jesus was really like and what he intended to offer to those whom he taught. My goal was to find a spiritual path that honored both my Native American beliefs and my experience with Christianity. I found that there are many parallels between the teachings of Jesus and the writings of his earliest first century followers and my understanding of the earlier Native American philosophy.

I have found it valuable to have the courage to re-evaluate past experiences. I have learned to take those experiences and pass them by what I know as my Sacred Self or the Elder Within. Native wisdom has taught me to learn from the past; to give gratitude for all experiences; for within them is the very medicine needed to for balance. This process has helped me with spiritual balance and has restored my love for myself and for life.

Chapter One: The Journey begins: Opening to Some Mysteries
Seven Signs for Writing This Book--"Manifest Destiny"--1452 Doctrine of Discovery--Today's Spiritual Revolution--The Michelangelo Mystery--The Parade Magazine Poll on Religion--Definitions of Some Terms--Six Pathways of Study--Old Medicine for New Times--A Grandfather's Story--Constantine and Christianity--Ancient Information is Available--Early Versions of the Bible--Sources of My Research-- --A First Look at the Study of the Hebrew, Aramaic, and Greek Languages

Chapter Two: The Colonization of the Americas and the World: It was Going to Happen!
Information Explosion and Native Prophecy--Some of the Real Story of Colonization of America (1492 to 1800's)--The Nature of Various Christian Groups--Vicious Attitudes and Actions of Christians upon Christians--Black Slavery--Some of the Myths About the Early History of the United States--Thomas Jefferson and His Beliefs, "The Jefferson Bible"--Some Notes About the King James Version of the Bible--A Discussion of "Victim Philosophy"--- Dealing with Victim Identity

Chapter Three: A Respectful Discussion of Christianity and Native American Spirituality
Religion Forced On Native Peoples—The Christianizing of Native Americans--Trail of Tears--1924 Native Citizenship--Genocide--Earth-based Philosophy--The "People of the Book"--Christianity in Review--Christianity and Natural Spirituality: A Look at the Similarities--Belief in One Great Source, the Great Mystery--Angels and Spirit Guides--Spiritual Stories, Parables and Wisdom Tales--The Use of Symbolism and Drawings--"Native American Philosophy and What Came Across the Waters: One and One is Three"--A Respectful Comparison of Native American Philosophy (A Way of Life) and Christianity--Relationship with the Creator: Separation or an Ever-present Creator--Some Peace Shield Teachings--Personal Vision and Group Spirituality--Christian Worship and Native Ceremony--Human Condition and "Being Natural"--Purification, Cleansing and the Natural Condition--Male Dominance/Women's Guidance--"Growing Spaces"--The Role of Elders--Right/Wrong, Good/Bad and "Being Related to All"-- Concepts of Evil, the Devil and Natural Spirituality--The Cathars--Surrender, Suffering, Sacrifice and Participation With all of Life-- Chosen People and Native Identity--Being Related to All--A Finnish Legend--Summary of Natural Spirituality and the People of the Book

Chapter Four: A Historical Glance at Christianity after the Ministry of Jesus
What This Study is NOT About and What IS My Intention—Some Conflicting Scenarios—The Council of Nicaea and Roman Emperor Constantine--Pagan and Roman Influences on Christianity -- Searching for the Ancient Teachings --An Aramaic Study of the Concept of Heaven----Original Sin--Sexuality and Spirituality--"To Be in the World But Not of the World"--Reincarnation Out...Death In!--Reincarnation and Karma--Access To God Through Jesus and The Church Rather Than a Direct Personal Relationship-The Trinity--"Son of God" discussion

Chapter Five: Understanding the Jewish Culture and the Story of Yeshua
The Nature of Judaism--Different Groups of Judaism--"Chosen People?"--Rabbi Kushner--Review of Judaism to this point of our Study--Honoring Jewish History--The Nature of Midrash--What About Satan?--The Essenes and Christianity--A Hebrew Study of Sin and Repentance—The Jewish Court of Law (Mishna)--The Role and Status of Women in Judaism

Chapter Six: Ancient Roots of Christianity--Yeshua and other Traditions
The Jesus Story and Other Ancient "Saviors", "In Time All Things Shall Be Revealed"--Egyptian Stories--Zoroastrianism--Goddess Traditions--The Aryan Race, The Goddess Tradition and Christianity: From Unity, to Duality, to a Masculine Deity--The Gnostics--How and why: Reasons for changes in the Jesus story—The Dark Ages--Father Thomas Doyle's sharing of the changes in Jesus' Identity: The Effect of the Barbarians Invasions on Christianity--Development of the Eucharist (Communion): the Role of Jesus

Chapter Seven: What are the "Actual" teachings of Yeshua?
The Role of Native American Spirituality--To Seek Spirituality--The Role of the Church Today--Getting to Know Yeshua--Concepts Prominent at the Time of Jesus--What Did Yeshua Say About Himself?--Most Biblical Scholars Would Agree--Hebrew Tradition of the Messiah--Some Ancient Observations About Yeshua--Jesus and Nature--The Hebrew Meaning of "Soul" and "Spirit"—The Greek Philosophy of Separation of Spirit and Matter--What Does it Mean to Have Faith?--The Meaning of Salvation--Ancient Clues to Help Sift Out the Teachings of Yeshua--The Oldest Bible in the World--The Sinaiticus (Sinai) Bible--A Church or a Gathering of "God's People"? -Christianity Came to a "Y" in the Road!


Appendix A - Jewish Religion in the First Century

Appendix F - What's this about the Free Masons? 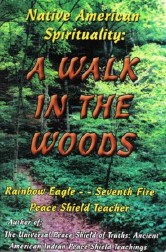 Native American Spirituality: A Walk In The Woods

Buy "A Walk in the Woods" on Amazon.com or contact Rainbow Eagle directly at [email protected]

Chapter One - From the Dust of the Land: Ancient Texts Are Becoming Available

Attempts to Regain the Culture ~ The Right Time To Take a Walk in the Woods ~ The Red Road ~ God (Great Mystery) and Native People ~ Native Life ~ Life Was Honored From the Very Beginning: Social, Spiritual and Political Roles of Native Women ~ Educating The Children ~ No Such Thing As Death ~ Oral Tradition, Story Telling and Tricksters ~ The Importance of Joy and Laughter ~ Honoring Personal Sacredness ~ Cycles and Circles ~ The Giving of Gratitude ~ The Elder Within and the Elder's Role in Community ~ The Swedish Fisherman ~ Mother Earth and the Indigenous People ~ Relationships Beyond Mother Earth

Chapter Four Indigenous Peoples Prophecies: A Future to Be Optimistic About

The Gift of Prophecy ~ The Power of Prayer, Love & Faith Related to Prophecy and the Future ~ Seneca Prophecy ~ Tha Anishinabe Seven (Eight) Fire Peace Shield Prophecy ~ Hopi Prophecy and Messengers ~ When the Condor and the Eagle Fly Together: Andean Prophecy ~ The Doctrine of Discovery - 1452 ~ Quetzalcoatl and Cortez ~ Inca History and Prophecy ~ Serpents, Elohim, and Luminous Beings ~ Ages and Cycles ~ The Golden Age ~ The Q'ero People of Peru ~ Q'ero Beliefs and Teachings ~ Taripay Pacha: The Age of Meeting Ourselves Again ~ 100th Monkey or Something Else? ~ A Message for Today ~ Prophecy by the Peacemeker: Deganawidah ~ Prophecy of the White, Red and Black Serpents ~ Some Mending of the Wounds of "American History"

Chapter Six A Walk in the Woods: Preparing For Cosmic Relationships

The Natural World is a "Classroom" Rather Than a Model of Spirituality ~ A New Culture is Developing: In America and Abroad ~ The Seventh Fire People: The New People ~ Getting Ready for "Cosmic" Relationships!

Chapter Seven How Do We Go From Here To There: Steps Toward Personal Healing